A downloadable game for Windows and macOS

Two Steps Forward is a 2D combat-based action game centered around having to swap between two characters. Each character has specific abilities and options that will cover the weaknesses of the other character. You may often find yourself wanting to use an option from the inactive character.

This project's gameplay and combat difficulty was heavily inspired by Dark Souls. Its art style drew inspiration from Bravely Default and The Liar Princess and the Blind Prince.

Sword:
Being a knight has always been a minor pastime activity for Sword. As such, she doesn't have much experience when it comes to swiftly moving around with a sword. However, Sword's strikes are not to be taken lightly. She has a set of offensive options that can take any foe down.

Shield:
Being left with only his shield, Shield's main strength lies within in his defensive options. He is the capable of stopping an opposing attack with his parry,  creating an opening for Sword to strike. Shield can also defend against attacks with his shield and avoid them completely with his roll mechanic.

Both builds of this game are made using Unity3D and I have no idea how to prevent the anti-virus from acting.  Allowing access on Windows may differ based on the anti-virus program you're running,  but you should only just have to  For MAC, you can right click on the game -> click Open -> and then allow access in the following window.

If you're having issues with beating the game, then I'd recommend trying to roll behind enemies with Shield and then attacking with Sword. Enemies can't turn around once they start their attacks, so they become more vulnerable if you're behind them.

I like how the combat feels more in this version; with the fact that energy takes longer to recover, there doesn't really feel like a cheap way to fight the enemies, and there's a reason to learn how to play each character. Since you do have to spend some time playing as each character, I think it's a good idea that both of them can fill the roles of the other. However, I feel like the effectiveness of these secondary roles should be adjusted. Sword's block appeared to be just as effective as Shield's block in reducing incoming damage, making him feel less valuable. In contrast, Shield's melee attacks felt extremely weak, having poor range and only doing a single point of damage, which isn't even enough to break the save stones in one hit. I feel like he could be boosted a little bit in this area. Shield's special parry move when swapping to Sword felt very good and played to the strengths of Sword's character, giving her an opportunity to land some free damage. I'm not sure what you could do with Sword's special move, but I would be really interested if it somehow played into Shield's abilities as well.

You might think that the game feels too easy, but I don't think that there's enough content to really judge the game on its difficulty as of yet. With the complexity of the game mechanics, it's important to provide an ample tutorial to allow the player to become accustomed to the controls. If you continue to add new content to this game, I think it would be reasonable to gradually raise the difficulty curve.

Thanks for playing the game again! I was concerned that giving each character a secondary role wouldn’t be a good idea, so it was really nice to get your feedback on it. I’ll keep your advice in mind when I get to balancing the game again.

I also think you’re right about it being too early to judge the game with its current amount of content. I do plan to keep working on this game, so I’m really grateful for continued feedback!

You're welcome. I can tell that this is a project you're very passionate about, and I'm glad to be able to test it!

I stumbled upon this project and found the premise to be very interesting, so I downloaded the game and gave it a whirl.

The visuals are really nice, and I was impressed with the frame count and smoothness of all the character animations. The controls are definitely a little bit complicated and take some time to get used to, but they still handle well enough.

I feel like the game's mechanics are in an awkward spot in this current state, though. The waiting period between swapping characters feels like it simultaneously takes too long and is too accessible. I didn't have any success with swapping between characters in the middle of combat and instead found that poking the regular enemies with Sword two times before running away was the most effective strategy. For the boss, I simply used Shield's dodge to get behind it and summoned Sword with the shift key to get some damage in from a safe distance; the energy bar regenerates quickly enough that I can just switch to Sword and run away before I can switch back to Shield. These strategies felt kind of like exploits and seemed to undermine the main idea of switching between characters on the fly.

Overall, I would consider this project to have a really promising concept that is in need of some additional balancing and polishing work alongside more content. Well done!

Thanks for giving this game a shot! I’m really grateful for the feedback you gave, and I’m still trying to balance the game to make it a more enjoyable experience.

The swapping issue is something I’m currently trying to fix and haven’t been exactly sure what could improve it yet. Your comment on how it’s too long, but also too accessible was helpful for me to pinpoint the problem. The comment on the shift key exploit was also really useful since I wasn’t fully aware of it.

Once again, I very much appreciate your feedback. I’m hoping to improve this project and make it something people can look forward to!

You're welcome! I'm interested in seeing where you end up taking this project in the future. 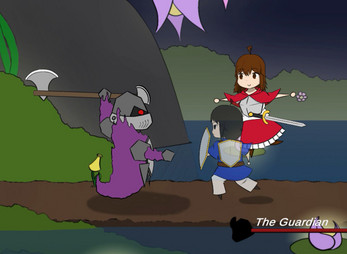 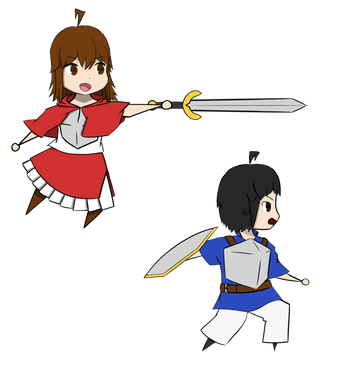 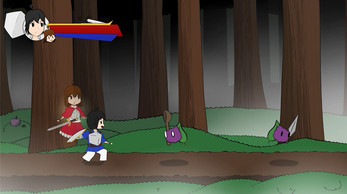 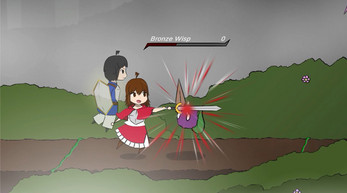